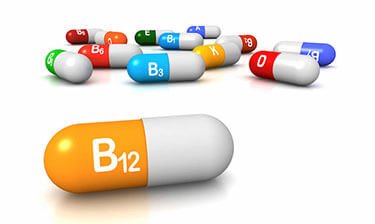 Vitamin B12 deficiency and its detection have been in the news lately from the New York Times and The Dr. Oz Show.

The effects of vitamin B12 deficiency are widespread.  Vitamin B12 has a major influence on the function of neurons and also on the ability of the bone marrow to make red blood cells.

B12 deficiency can cause almost any psychiatric symptom—from anxiety, and panic to depression and hallucinations.  This is because B12 deficiencies trigger symptoms in the nervous system and red blood cells.

While it is not possible to go into the details of the diagnosis and how to interpret these tests, it is important to understand that assessing vitamin B status involves understanding A DYNAMIC (moving & interacting changes in these parameters) not static assessment of the metabolic systems involved.  And because it is a dynamic system, a static measurement (e.g., B12 level) does not suffice.
As an example of the interactive dynamics, a low iron level makes red blood cells smaller; and, low vitamin B12 makes red blood cells larger. Thus, normal red blood cell size can present a false normal because low iron and low b12 counterbalance each other. If one assesses the size of the red blood cells alone once would miss this fact. However if one also looks at the iron and homocysteine, one would not miss it.  Similarly, a homocysteine level is the result of B12, folate, and mercury levels and therefore a normal homocysteine does not necessarily mean an absence of of B12 or folic acid deficiency.  In turn, all must be assessed to understand the homocysteine.

It is critical that a vitamin B12 deficiency be detected as early as possible in order to prevent permanent damage to the nervous system.

The Best Way to Assess for B12 Deficiency

(Methylmalonic acid testing is commonly thought to be useful, however a little known fact is that less than 20% of the variation in the blood or urine level is accounted for by B12 metabolism, so this test is not useful.)
If you think you have a B12 deficiency, get yourself assessed and treated right away.