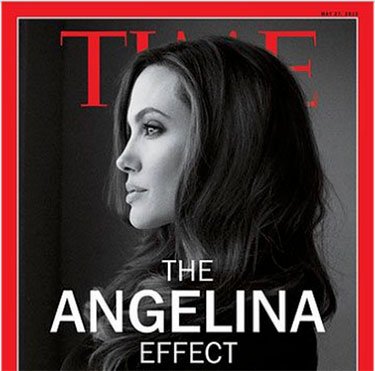 Response to “The Angelina Effect”

“The Angelina Effect” [May 27] in Time Magazine details Angelina Jolie’s decision to have a double mastectomy.

The May 27th cover story, “The Angelina Effect” was well done. However, what was not covered in the media generally, nor in the article, was the important fact that genetic testing may give false results. Both physicians and the public operate under the mistaken assumption that lab tests, and in particular genetic tests, are always accurate. In fact, they are not. This fact needs to find its way into the public debate around preventative mastectomies.

I have been using genetic testing for more than 17 years. Recently, a patient was tested at three different labs for a genetic variant which affects folic acid metabolism. One of the results was not consistent with the others; More than 5 months were spent wrangling with the errant lab, setting up a conference call (which the errant lab refused to join) with a nationally recognized pathologist and lab directors in order assess sources of the error. The samples were re-drawn, and different testing platforms were compared. This time, all the results were identical.

Unless Ms. Jolie’s genetic tests were repeated with a second blood sample, blindly (under a pseudonym), there is a small chance that they were falsely positive. What are the chances? We do not really know. According to a government document (1) due to patent restrictions, there is only one lab (Myriad Genetic Laboratories) which can perform the BRAC test, and the lab only provides a summary of its data. Based on only 73 samples, the risk of false positives was determined to be 0%. Considering the clinical ramifications of a false positive test, this is hardly robust documentation.

While Ms. Jolie may have had physicians who were thoughtful enough to run a blinded second sample, at more than $3000 per test, I doubt most women would be able to afford repeated testing, nor would it be considered. Genetic testing may not always be accurate and the ‘Angelina Effect’ needs to be tempered by that fact.

DSM-V & Why Psychiatrists Need to Be Open to Other Fields